Tua Tagovailoa back in Alabama for more tests on hip injury 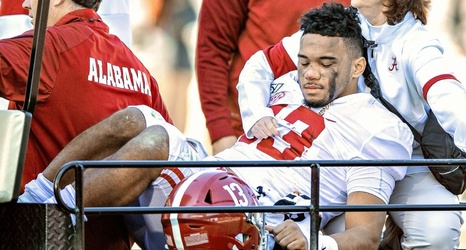 Alabama quarterback Tua Tagovailoa was carted off in the second quarter of Saturday's game against Mississippi State with a hip injury. He was airlifted back to Birmingham for CAT scans and MRIs.

Tagovailoa was injured with three minutes remaining before halftime when he was brought down by two Bulldogs defenders while rolling to his left on a third-down play. He suffered a bloody nose and couldn't put pressure on his right leg when he was helped up by trainers.

A source told ESPN's Adam Schefter that there was concern before the end of the game that it was a "very serious" injury.