From Kansas to Houston, Grimes finds his fit with Sampson 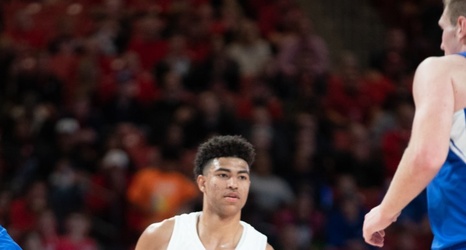 After losing their top three scorers from the 2018-19 season, questions arose on how the Cougars were going to follow up their Sweet Sixteen run.

Last June, an answer was given when a 6-foot-5-inch sophomore from The Woodlands announced he was transferring to Houston from Kansas — Quentin Grimes.

Grimes has made a quick impact since joining the Cougars, leading the team in scoring through the non-conference portion of the regular season schedule and increasing his field-goal shooting percentage from a year ago despite averaging more minutes per game with Houston.

After his first season, the guard went through the pre-draft process where he was told he was projected to be a second-round pick, so he decided to pull his name out of the NBA draft pool and return to college, just not to the Jayhawks.