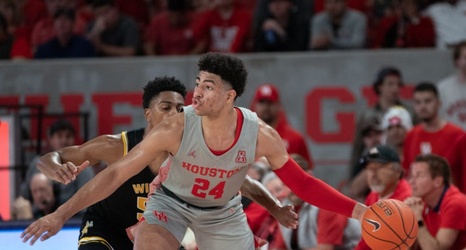 The Cougars earned a hard-fought 62-58 road win over South Florida to remain atop The American standings on Wednesday night.

Sophomore Quentin Grimes had a great game against the Bulls, and he had it going early in the first half as he either scored or assisted on 10 of Houston’s first 12 points.

Junior forward Justin Gorham provided a nice boost off the bench hitting a pair of 3-pointers to help the Cougars build up an early 10-point, but South Florida came storming back from the deficit by going on a 9-0 run, which was highlighted by senior guard Laquincy Rideau, who scored five points and assisted on a basket during the comeback.