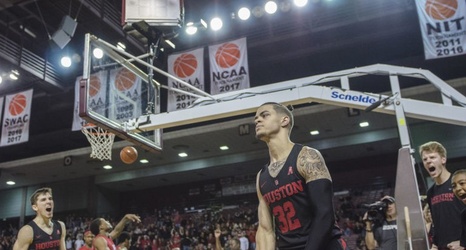 Thirty four years ago, the Houston Cougars defeated the Virginia Cavaliers and headed to the 1984 NCAA championship game where the Hakeem Olajuwon-led team lost in the finals to Georgetown.

Since 1984, the Cougars have lost every NCAA tournament game they played, until tonight.

The Cougars hung on to defeat the San Diego State Aztecs 67-65 to end the long dry spell and move on to the next round of the NCAA Tournament.

Both teams played with a fast pace, but it came with a cost as the two teams combined for nine turnovers in the first 10 minutes.