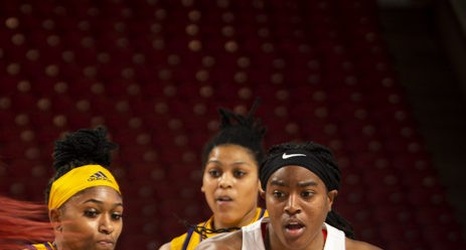 Down eight entering the fourth quarter, the Cougars mounted another thrilling comeback to defeat the SMU Mustangs 55-53 for a second-straight win.

In the first, SMU jumped out to a quick lead and continued to add to it throughout most of the quarter. The Cougars struggled offensively, committing five turnovers in the opening period, which helped the Mustangs build the lead 19-9 after one.

In the second quarter, Houston started to chip away at SMU’s lead. Junior KeAsja Peace, who scored a quick six points to open up the period, helped spark the comeback.

The Cougars cut SMU’s lead down to five midway through the quarter, but the Mustangs closed out the half on an 8-2 run and took a 33-22 lead into the locker room.