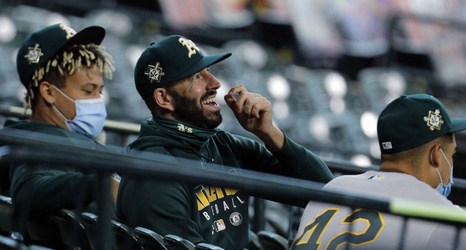 HOUSTON, TEXAS - AUGUST 29: Former Houston Astros pitcher Mike Fiers,(c), who broke the news that the Astros cheated during their 2017 World Series win sits in the overflow section during game one of a doubleheader at Minute Maid Park on August 29, 2020 in Houston, Texas. All players are wearing #42 in honor of Jackie Robinson Day. The day honoring Jackie Robinson, traditionally held on April 15, was rescheduled due to the COVID-19 pandemic. (Photo by Bob Levey/Getty Images)

The “We Want Fiers” chorus was loud and clear over social media last year as Houston fans desperately wanted the Astros to get a chance for revenge against Mike Fiers.