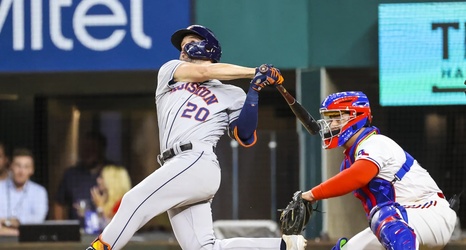 It took the Astros three innings to figure out Rangers starter Glenn Otto, but when they did all the mysteries were fully revealed. By the fourth inning, six hits, and three walks later, the Astros found themselves up 7-0. It was way more than enough for the win.

The key hits were doubles by Yordan Alvarez and Kyle Tucker, a two-RBI single by Alex Bregman, and a three-run, 442-foot homer by Carlos Correa.

The Astros kept piling on, with two more runs in the sixth and three in the eighth. Meanwhile Astros starter Luis Garcia managed to strand baserunners all night, allowing only one run in 5.