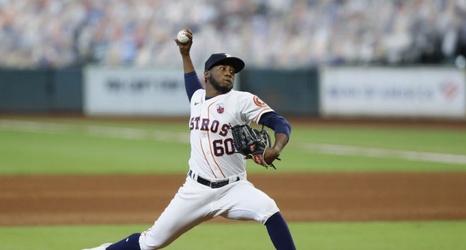 HOUSTON, TEXAS - AUGUST 16: Enoli Paredes #60 of the Houston Astros pitches in the seventh inning against the Seattle Mariners at Minute Maid Park on August 16, 2020 in Houston, Texas. (Photo by Tim Warner/Getty Images)

There are several differences in the Houston Astros ALDS rosters from 2019 and 2020.

With the fifth playoff appearance for the Astros in the last six years, the team has come a long way from franchise players to a whole new rotation and rookie bullpen. With the big losses of Gerrit Cole to free agency and Justin Verlander to Tommy John, the pitching core looks a lot different, but the one thing that stands out is the starting nine.