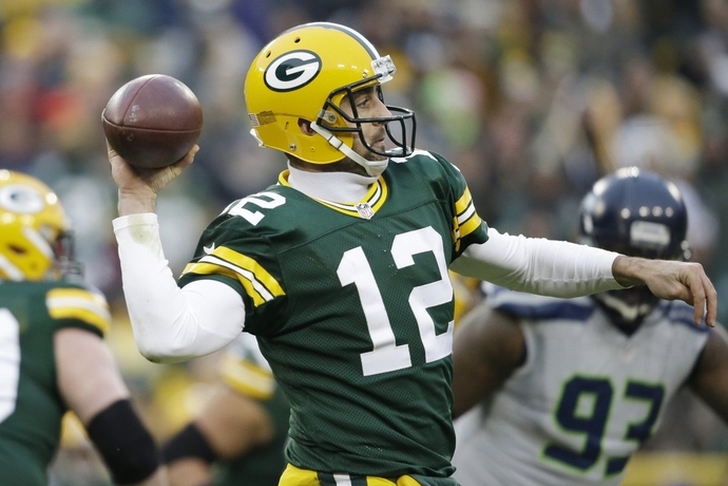 The Green Bay Packers took it to the Seattle Seahawks Sunday, picking up a 38-10 win. It was an impressive effort in all three phases for the Packers, who looked like a playoff team. Aaron Rodgers was fantastic, and the defense managed to force five Russell Wilson interceptions.

Here are three things we learned from the Packers' 38-10 win Sunday.

3. Packers Offense Looks Sharp
After a really bad stretch in the middle of the season, this is what the Packers needed on offense. In less than a full game (because Brett Hundley came in), Aaron Rodgers completed 18 of 23 passes for 246 yards and 3 TDs. But there is some concern around Rodgers, as he suffered a calf injury on the third play of the game. He played through it, but there are worries about how he'll handle it the rest of the season. The ground game wasn't great, with just 93 yards and two TDs on 30 carries, but it got the job done. When you put up 31 points on the Seahawks defense, you did a good job. And as mentioned below, the Packers defense did a really good job against Seattle.

2. Seahawks Offense Has Issues
It'd be easy to write this terrible effort off as a fluke, if the Seahawks hadn't laid eggs in other games. But this is the same team that scored all of five point against the Bucs, three against the Rams, six against the Cardinals and 12 against the Dolphins. The Seahawks have shown the ability to score, but they are far from consistent. Russell Wilson threw five picks (even if they weren't all his fault, because his WRs dropped too many passes), while the running game had 137 yards on 26 carries. Wilson finished the day 22 of 39 for 240 yards, 1 TD and those five picks. The defense couldn't get pressure on Aaron Rodgers, let alone stop him. No one wants to play the Seahawks in Seattle, but this team has issues on the road. If the offense can't get it figured out

1. Green Bay Can Still Make The Playoffs
When the Packers dropped their fourth straight game earlier this year to fall to 4-6, it looked like they weren't going to make the playoffs. But since then, they've won three straight and are now 7-6. They've still got a very tough task to catch the Lions in the NFC North, but they might be able to sneak in as a Wild Card team. They're in the mix with the Bucs, Giants, Redskins and Vikings. Don't count out Green Bay and no division winner wants to play Aaron Rodgers in the playoffs.