WATCH: Every Packers TD (And The Winning Field Goal) From Green Bay's 34-31 Win Over The Cowboys 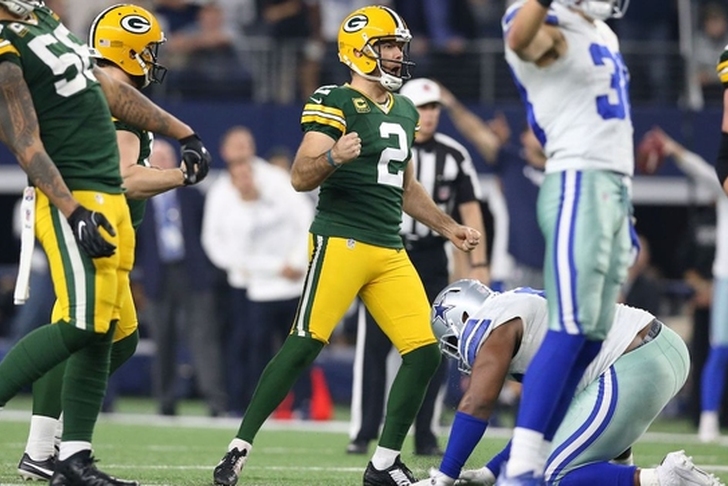 The Green Bay Packers' 21-3 lead didn't last against the Dallas Cowboys Sunday. But, Mason Crosby delivered a 51-yarder with no time left to secure a thrilling 34-31 win over the Cowboys.

Check out all the Packers touchdowns from the game below, plus Crosby's game-winning field goal.

Down 3-0, Aaron Rodgers used a free play to hit TE Richard Rodgers for the 35-yard score.

Early in the second quarter, Ty Montgomery plunged in from three-yards out to make it 14-3 Packers.

#Packers add another TD. Ty Montgomery runs it in from 3 yards out to make it 14-3 Green Bay. #GoPackGo pic.twitter.com/Z7jMPprmuo

Montgomery added another TD to make it 21-3 later in the quarter.

#Packers and Ty Montgomery AGAIN! A one-yard run makes it 21-3 Green Bay in the middle of the 2nd Q. #GoPackGo pic.twitter.com/RsPqZ0Khma

The first drive of the second half results in the 3-yard TD from Aaron Rodgers to TE Jared Cook. It's 28-13, #Packers. #GoPackGo #GBvsDAL pic.twitter.com/lAypkcgTcA

After the Cowboys made a thrilling comeback, both sides exchanged 50+ yard field goals in the final two minutes. But, Crosby drilled a 51-yarder to win the game.

IT'S GOOD! Mason Crosby from 51-yards wins it for the #Packers as time expires! #GoPackGo #GBvsDAL pic.twitter.com/f4AqXJh8WL

That made it 34-31, sending the Packers to the NFC Championship game.