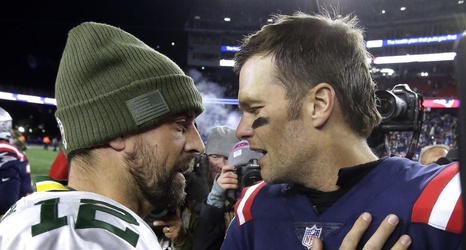 GREEN BAY — In the days leading up to their much-hyped — and understandably so — showdown on NBC’s “Sunday Night Football” two years ago, Aaron Rodgers lamented how rarely he and his pal Tom Brady had faced each other.

Because the pair had spent their entire careers with the same teams — Rodgers with his Green Bay Packers, Brady with his New England Patriots — the NFL’s scheduling formula for interconference matchups meant they could only play each other in the regular season once every four years.

Because of an untimely Rodgers concussion the week before they were supposed to face each other late in the 2010 season, and thanks to the Packers epic collapse in the 2014 NFC Championship Game in Seattle, when the Packers were three minutes away from a berth in Super Bowl XLIX against Brady’s Patriots, Rodgers and Brady have only faced each other as starters twice: In a 2014 regular-season matchup at Lambeau Field, and in a 2018 meeting at Gillette Stadium.