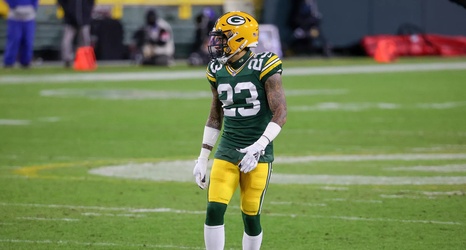 On Saturday, the Green Bay Packers earned the right to host the NFC Championship Game by defeating the Los Angeles Rams 32-18. Green Bay did so with a defense that stayed light and an offense that mixed up personnel consistently and used three running backs throughout the contest.

When the Rams had the football, they lined up almost exclusively in 11 personnel — one running back, one tight end, and three wide receivers. That was a bit of a surprise given that Cooper Kupp was inactive, but the Rams used the trio of Robert Woods, Josh Reynolds, and Van Jefferson nearly constantly, usually only switching out their tight ends in Tyler Higbee and Gerald Everett.