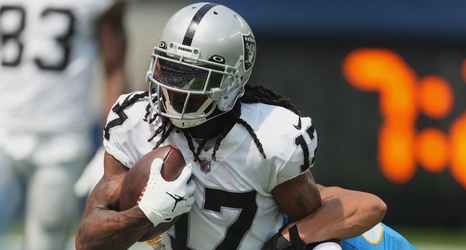 HENDERSON, Nev. -- Davante Adams was targeted 17 times by Derek Carr and came away with 10 catches for 141 yards in his debut for the Las Vegas Raiders in their season-opening loss at the Los Angeles Chargers.

Since then, Adams has been targeted a combined 17 times and has seven catches for 48 yards, in losses to the Arizona Cardinals and Tennessee Titans, with the Denver Broncos in town this weekend.

And while many are wondering why Adams, acquired in a blockbuster trade with the Green Bay Packers for first- and second-round picks in March before getting a five-year, $140 million extension, has seemingly become a forgotten man in Las Vegas, he insists no one is "trippin'" this early in the season.