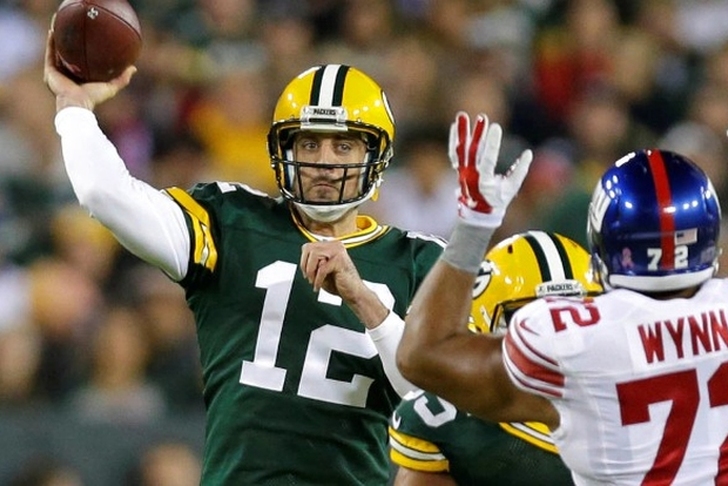 The Green Bay Packers got off to a slow start, but Aaron Rodgers eventually found his rhythm and carried them to a 38-13 win over the New York Giants.

Rodgers finished with 362 yards and four touchdowns, tying a Packers postseason record for touchdown passes in a game. It was also Rodgers' fifth career postseason game with at least 300 passing yards.

New York built an early lead off the back of two field goals, but the Packers took the lead late in the first half on a pass from Rodgers to Davante Adams. However, they took over the game on their next drive.

After stopping the Giants on the ensuing possession, Rodgers found Randall Cobb in the back of the end zone on a 42-yard Hail Mary on the last play of the half, something he has turned into somewhat of a routine:

That play gave the Packers all of the momentum in the game, setting the stage for the win. The Giants were able to cut that lead to 14-13 in the third quarter, but Rodgers threw two more second-half touchdown passes to Cobb before Aaron Ripkowski iced the win with a one-yard touchdown run.

Cobb finished with five catches for 116 yards and those three touchdowns to complement Rodgers in the passing game, while Davante Adams caught eight passes for 125 yards and a touchdown.

Green Bay advances to face the Dallas Cowboys next Sunday in the NFC Divisional Round of the playoffs. The game will be held in Dallas at 4:40 pm ET on FOX.

For the Giants, Eli Manning finished 23/44 passing for 299 yards and one touchdown, but he didn't get a lot of help. Odell Beckham Jr. caught just four passes for 28 yards, and had a career-high three drops.