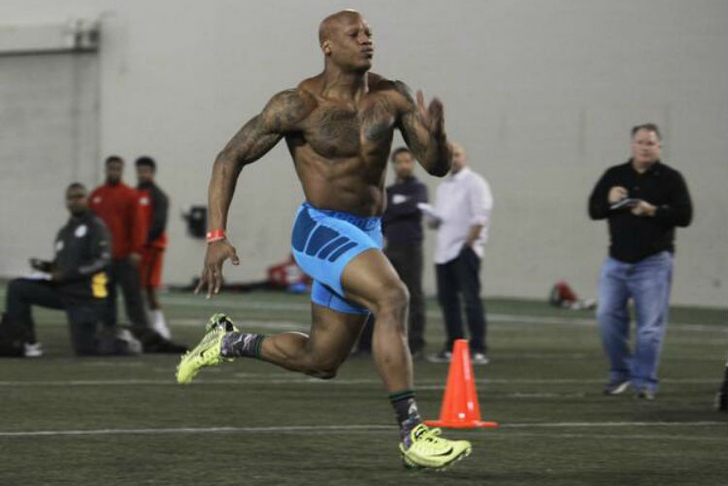 Remember the slogan your high school coaches would always use in the weight room? "BFS?" Getting bigger, faster, and stronger is the mantra of most teams when it comes to drafting philosophy, but none more-so than the squad from America's Dairyland.

The Packers need an infusion of speed and athleticism with this year's draft class-especially on the defensive side of the ball. Hit the jackpot on their picks, and Green Bay could easily be in position for another title run. Crapping out on potential starters from their 2014 selections could mean another long, injury-riddled season for fans to fuss about through the winter.

The good news is that GB will have enough chips to be aggressive on the poker table that is Radio City Music Hall come May 8th. Receiving two compensatory picks this off-season (one for the 3rd and 5th rounds, respectively) gives GM Ted Thompson and staff the flexibility to move around in draft order throughout the three-day process. However their strategy plays out, the Packers should have the ammo to put their best foot forward and get the guy they want in any round. Here's how Green Bay should use their nine slots in order to bolster the roster effectively this year:

Explosiveness is apparent after just a few moments of watching footage on this guy. Shazier has the speed/power combo you look for in a rangy 'backer, with ability to flow sideline-to-sideline and make plays. Recording over 140 tackles for OSU in 2013 is impressive in itself. Following a lineage of Buckeye greats such as Pepper Johnson and Chris Spielman in leading the team in tackles for back-to-back years says even more about his productivity and consistency.

A Florida native, Shazier would be GB's signature stamp-a model of what they should be looking to add to the team this year. In order to continue to be among the NFL elite, they must stockpile versatile athletes who can fill multiple roles while still making an immediate impact on the field. Though many project him as a 4-3 "Will" linebacker, he'd be a quick-striking ILB for the 3-4 scheme GB uses with DC Dom Capers. When taking into consideration Shazier can be paired with former Buckeye star A.J. Hawk as a mentor, the choice to take him would be absolutely solid-and fill an important need in the front seven.

The second round for Green Bay will be critical-expect them to make moves to jump up/get additional selections here. Hageman will be the first one they snatch. Deemed a classic boom-or-bust by draft experts, the 6'6'' lineman overcame childhood obstacles to become a team captain for the Golden Gophers. His stats (38 tackles and 2 sacks) weren't necessarily eye-popping, and his motor and pad level have been scrutinized. However, his unique frame combined with fluidity in motion makes for an outstanding mold of clay any coach should want.

One of Hageman's best attributes is an uncanny leaping ability for someone his size. A 35'-1/2'' vertical leap explains how he was able to amass 8 pass breakups as a D-lineman. Two kick blocks from last year also show he could provide instant value on special teams for a club. GB needs playmakers along the trenches, and going up to get one like Hageman should be a top priority.

In a perfect world the Packers would still have Greg Jennings, James Jones, and Jermichael Finley as pass-catchers for Aaron Rodgers. But by the time training camp opens, Finley should be the last of the former field-stretching trio to no longer be a member of the organization.  Andrew Quarless was admirable in his understudy role once Finley suffered a scary neck injury that may still cost him his playing career. Finishing the season with 32 receptions while maintaining his primary role as additional blocker, Quarless was rightly re-signed this off-season.

He is not, however, the game-changing mismatch down the seams that pro offenses love to utilize. While TEs Eric Ebron and Jace Amaro appear to project as the Jimmy Graham/Rob Gronkowski types who slice defenses, the player whom Green Bay would use most, and whom they should select, is Austin Seferian-Jenkins.

The Husky TE won the Mackey Award last year, and though recovering from a stress fracture injury, should still be ranked high on many a draft board. Seferian-Jenkins has a big frame, soft hands, and the best blocking mechanics out of the projected top tight ends available. Pairing him with Quarless could create a two-headed monster that just might be enough of a threat in the pass game to fully replace Finley.

Run-blocking has never been the former Texas Longhorn's strong suit, and his potential heir apparent might already be as good as him in that area. Based on the film, it wouldn't be a stretch to assume that working with a quarterback as polished as Rodgers could bring out All-Pro level play in Seferian-Jenkins.

No, not inside or outside linebacker. It has been assumed that Green Bay will look to draft a starting safety since their season ended, but it should not be Clinton-Dix or Pryor. With 4.4-4.5 40-yard dash speed, he is more than fast enough. On game tape he displays fluid hips that make him a good enough pass defender in man or zone. He is simply devastating to an offense as a read-recognition player in the box, disrupting plays left and right before they can develop. His tackling is sure enough. As an every down linebacker in certain schemes he could struggle. But as a base safety/nickel linebacker for Green Bay, he could flourish.

Identifying just where Smith will be drafted is the issue. For one, as an undersized LB his stock is certainly varied amongst teams, depending upon what style of defense they run. His supposed failed drug test, as reported by the Orlando Sentinel, won't do anything to help him either.

Smith has given indications that he sees himself as a linebacker at the next level specifically. However, in order for him to be more than a fledgling special teams player fighting to stay on a roster, he needs to become a punishing, roaming strong safety who plays like a linebacker. The tradition and discipline from a franchise such as Green Bay (who have good history with FSU players on the next level) would help with that.

Green Bay would be making a splash by taking Smith here. The Colts have the fewest picks of any team, and should be willing partners to go down for extra chips later within this year's talent-laden crop. Some might even scoff at the selection as a reach. But adding this piece to the puzzle (along w/ Shazier and a motivated Hageman) would infuse the youth, physicality, and playmaking potential needed to finally get the Packers' D back in top-five statistical recognition.

Green Bay will mainly use the top of their draft board to grab difference makers on defense. The latter half will be to replenish losses/add depth on offense.

One of the losses the Packers suffered was that of starting center Evan Dietrich-Smith to Tampa. Swanson could be his immediate replacement, or at least be developed into a viable option in a year or so. Having started 50 games for the Razorbacks in the SEC against NFL-caliber defensive tackles gives him experience that translates to the professional ranks.

What he lacks in strength he appears to make up for in football IQ and attention to detail-which is basically the M.O. for Packer O-lineman. With added bulk and OTA work, he could turn into a young complement for the best QB in the game, with a fellow young player in Eddie Lacy to help him via the run.

The Badgers have been known for years as the originators of ground-and-pound football. Their draft studs are usually the big uglies up front. With the switch in head coaches from Bret Bielema to Gary Anderson, Wisconsin's offensive philosophy has gradually begun to add diversity. Jet sweeps and passing concepts out of spread formations weren't foreign language in 2013-and the biggest beneficiary of these changes was probably Jared Abbrederis, who saw his season reception total jump by nearly 40 percent for his senior season.

The former walk-on worked himself into UW's top receiver over a four-year span. He has sure hands, runs good routes and is very cerebral as an extension of the quarterback. He is adept at properly working down-and-distance scenarios and doesn't shy away from big games, or competing against superior athletes in the defensive backfield.

Abbrederis should be a stellar #4 WR right away for GB's offense, considering he absorbs the playbook quickly and adapts on the fly in training camp. With Wisconsin ties and possible innate chemistry with AR12 as a former QB (similar to the Randall Cobb/Aaron Rodgers relationship) his ceiling could be as a high-volume chain-mover with Wes Welker-esque production down the road.

Having played in the innovative and high-octane Duck spread attack, Huff would be a luxury (and very high value) pick at this point in the draft. Due to the vast depth at the receiver position this year, it is quite possible that the Texas native is still on the board for the Pack here-which would be their last selection based on assumed trades of compensatory picks/other late round slots in order to be more active on Day 1.

Huff has the size, speed, and elusiveness to be a great complementary receiver-just like James Jones was out of San Jose State. In fact, Huff's profile is very similar to Jones-a strong, physically gifted player who can get you YAC with ease. But sometimes has a case of the dropsies.

Huff is a natural with the ball in his hands or without, having gotten extensive work blocking in the Oregon scheme. To keep the up-tempo Duck offense on schedule receivers must block with consistent results. This fact, along with his "TAZR" experience in the UO offense, would allow him to be interchangeable at every WR position for Green Bay and succeed. Keeping up with Aaron would not be a problem; before long Huff would have Rodgers dialing up quick slant audibles out of the no-huddle for huge dagger plays, demoralizing NFC North foes. No one is better at developing players than the green and gold-and there is plenty to build off of with a proven track record for Huff to follow.

Green Bay has an opportunity to climb back into the thick of the Super Bowl hunt with the 2014 NFL Draft. The Packers don't need to waste time (or roster spots) on projects like developing a QB or small-school "potential players". They need to think big and bold. Use their bushel of picks to get as many Day 2 cracks as possible and strike the iron while it is hot-or before the dynamic athlete at a need position is gone. If the Pack get the right mix of young talent to shore up their team, they should not only be the perennial favorites in their division, but have an inside track to take down their newfound enemies in the NFC West for conference supremacy-and another Lombardi trophy.