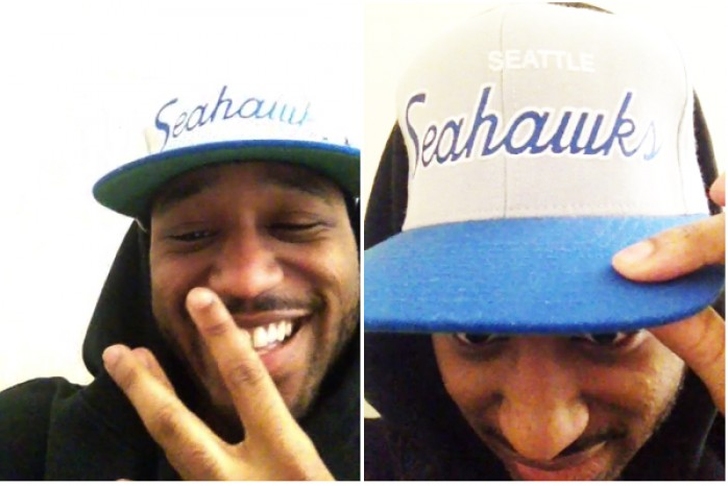 The Seattle Seahawks are the best team in the NFL right now. Yes, those same Seahawks that were the beneficiaries of the "hail mary" call from 2012. The same Seahawks that got over on the replacement refs...at the expense of the real "America's Team". It's still a hard pill to swallow, but reality has to kick in at some point. After reality comes humility, and what better way to show that than to salute your foe?

While this may be nearly impossible to do on the gridiron, it should be easier to attempt in social settings. Especially when your foe just so happens to be one of the best young hip-hop producers on the scene. After a recent live performance on the campus of Florida State University, Seattle-based musician Sango sat down with Chat Sports to talk (gloat) about the newly crowned champions and give his thoughts on a former Badger star, who compares to Seattle as a sports town (in his opinion), and to give a surprise mea culpa of sorts on behalf of his squad for their larcenous ways:

Chat Sports: The Seattle Seahawks are the newest champions in the nation right now - what is the vibe currently from your perspective as a native of the city?

Sango: I haven't been back [in the city] since the summer, but I have family there-basically what they're telling me is everyone is really proud. You know, a lot of stuff doesn't really happen in Seattle. It's a wonderful city, but it's not like New York or LA - or Atlanta or Miami. For something like this to happen, we're definitely taking it in... For us to win [the Super Bowl] is amazing.

Chat Sports: Do you see any parallels between the team and your musical team - considering you're an up and coming artist with a unique sound and the 'Hawks were considered by most as an underdog with a unique roster of players and fan support?

Sango: I think with [my musical team Soulection and the Seattle Seahawks] there's a LA connection, you got Richard Sherman, a lot of people. We got people also from everywhere-the Netherlands, England, Australia, Michigan, Texas. In that element it's similar, because we bring what we learned just like the team brings guys from these other colleges. It's not just pure LA; the Seahawks and Soulection is a collection of players with a similar goal.

Chat Sports: As a musician, you have the privilege of traveling more frequently than the average person-so you get to see different types of fans in many different forms of human culture - with that being said, how would you rate Seattle as a sports town?

Chat Sports: Yeah, because everyone on TV talks about the noise there...

Sango: It's the acoustics of CenturyLink Field. Before they built that they played in the Kingdome - it was flat and round... Like a donut. That's where everybody played-the Mariners and the 'Hawks. They tore that down-and now they got Safeco Field and CenturyLink. [CenturyLink Field] is like a viking ship! It's tall [laughs]. It's definitely loud-it's hard to hear the person next to you.

Chat Sports: Like yourself, the current team is very young, with the average age of the squad being just over 26. While it's apparent you have a bright future as a music producer going forward, do you think the Seahawks have lasting power atop the NFL?

Sango: I tell you what, Russell Wilson is a great leader. And he is a young leader. He's had adversity with the height thing. The fact that they displayed such dominance in that Super Bowl - it lasted the whole game. It wasn't like they slipped up. They put so much pressure on Peyton Manning and his team-that shows you how hungry they are. So they're team is gonna progress even more as long as they have that chemistry and Pete Carroll to give them that drive.

Chat Sports: And lastly, when will you guys say sorry for robbing the Packers in 2012 with the questionable "hail mary" call at the end of our epic matchup in CenturyLink Field?

Sango: Okay, okay, I got something. It's a sorry but it's a "double sorry". I wanna say sorry for robbing you, the Green Bay Packers, respectfully. It's a sport, but we still made our way to the championship [this year]. But, if anybody sees this that is a Steelers fan, because they "steal" stuff [laughs]; you know, we got robbed back in 2005...

Sango: With Hasselbeck and Shaun Alexander, the Seattle Seahawks got robbed from our Super Bowl. People sleep on that.

Chat Sports: So you're saying, it was just you all's turn?

Sango: It was our turn - we got robbed, and we robbed!

So from Seahawks fans' point of view, we already got ours when we won Super Bowl XLV. Yeah, I'm sure you don't buy that, either.