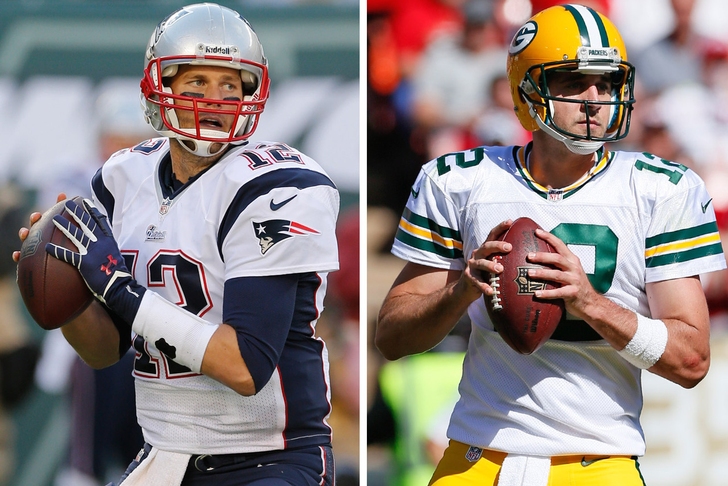 The first true meeting of Rodgers vs. Brady was a game many thought might be a Super Bowl preview. First things first however, as both teams were jockeying for playoff seeds in their respective conferences.

The turning point came on a critical sack of Brady on third down and nine from inside Packer territory with less than three minutes to play. This forced the Patriots to settle for a Gostkowski field goal attempt that he would miss from 47 yards.

The Packers opened the game with 13 straight points and never trailed throughout the course of this game, which helped take away the running game for New England. The Packers held LeGarrette Blount's touches in check by forcing the Patriots to play from behind for much of the game. Blount was effective in limited carries, but New England was forced to use quicker methods of moving the ball down field and thus lost the time of possession battle by almost a 2:1 margin.

The Patriots elected to drop back in coverage to stop the Packers offense for much of the game. Aaron Rodgers was still able to pick the Patriots apart for over 350 yards and two scores thanks to a heroic effort by Josh Sitton and company. The unit did give up three sacks, but these came mostly from Rodgers trying to do too much as opposed to poor protection

As he seemingly does every Sunday, Gronk was a matchup nightmare for the Packers defense, hauling in seven passes for 98 yards. His efforts helped sustain New England drives and keep the Patriots within striking distance down to the final couple minutes.

On the Hot Seat: Mason Crosby

Crosby missed a makeable 40-yard field goal attempt that would have put the Packers up by 12 in the third quarter. Crosby has been fairly reliable for most of the season, but this score could have made a difference in a game that was decided by less than a touchdown. The Packers will need to be able to trust their kicker to get them through clutch situations in close games down the road.

The Packers take on the Atlanta Falcons in prime time a week from Monday at Lambeau Field. The Patriots also play in prime time against the Chargers in San Diego next Sunday night.