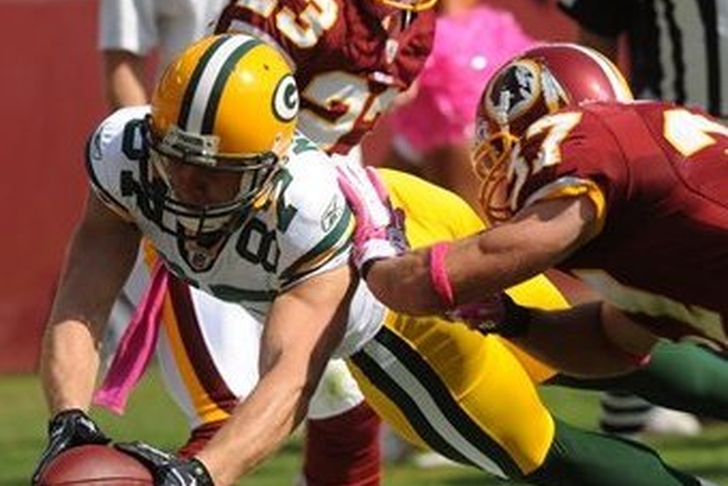 Aaron Rodgers and the Packers enter week two 0-1 after a dropping a hard-fought opener to Colin Kaepernick and the San Francisco 49ers.

The Pack opened up on offense, and quickly returned to their no-huddle offense. Rodgers found Randall Cobb for a 21-yard pickup on third down, and just a few plays later, the pairing looked to have connected for a touchdown but replays showed Cobb stepped out of bounds. Running Back Eddie Lacy took a punishing hit from Brandon Meriweather at the end of a 10-yard run, and looked so shaken up he had to leave the game. James Starks replaced Lacy, and team neurologists confirmed that Lacy received a concussion and will miss the remainder of today's game.

The Packers made their way to Washington's 9-yard line, but back to back sacks by Ryan Kerrigan forced Green Bay back into a 3rd and goal from the 24. Rodgers was able to find Jermichael Finley, but Finley was brought down ten yards from the end zone and the Packers were forced to settle for a field goal.

Robert Griffin III took over at the 20, and while his first pass went for 14 yards over the middle the drive quickly fizzled out. The Packers got the ball back after less than two minutes of Washington possession, but the pass protection exposed Rodgers once again. Brian Orapko brought the Packers QB down on the first play of the series, and in just half a quarter Rodgers had already been sacked three times.

The defense held firm, forcing a three-and-out on Washington's next possession, and Green Bay took over once again with 3:08 remaining in the first quarter.

On 4th and 3 from the 35, Mike McCarthy elected to go for it instead of take the long field goal, and Randall Cobb repaid his faith in the offense by making a catch over the middle and taking off for the end zone. Cobb didn't step out of bounds this time, and with 2:27 left in the first the Packers went up 10-0.

The Redskins weren't able to make any headway on their third drive of the game, and the quarter wound down with the Redskins preparing to punt it away for the third straight time. At the end of one, it's Green Bay 10, Washington 0