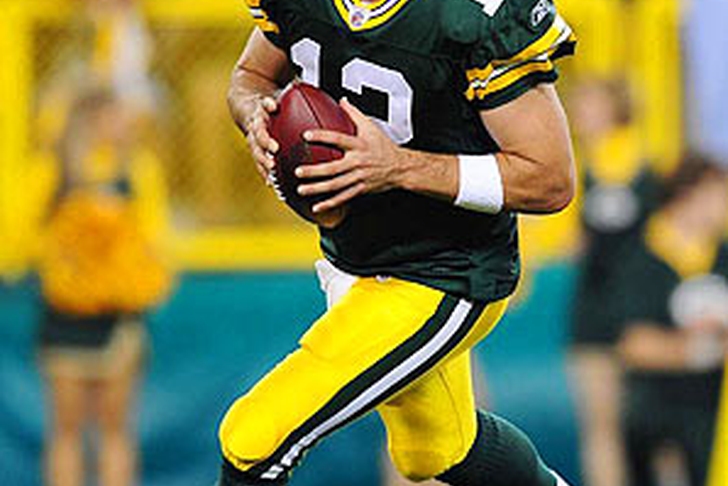 After an evenly-matched first quarter, the Packers and the 49ers both their tough defensive play. The Packers successfully negated San Francisco's opening drive of the second quarter, they immediately lost possession following a fumble from rookie Eddie Lacy that was recovered by 49ers CB Tarell Brown.

The fumble set up the 49ers at the Packers 14-yard line. After a few short-yardage gains, Colin Kaepernick made a scramble to the left, but Clay Matthews was flagged for a late hit as he tackled Kaepernick as he was running out of bounds. Niners Tackle Joe Staley immediately went after Matthews, and the resulting retaliation penalty negated the first down the 49ers would have picked up thanks to the late hit. After the offsetting penalties, it should have been 4th and 2, however the referees mistakenly replayed the 3rd down.

The officiating mistake proved costly. On the very next play, Kaepernick spotted Anquan Boldin’s crossing route over the middle, and Boldin skipped through a tackle on his way to the end zone. With 8:57 left in the quarter, it was 14-7 49ers.

The two teams battled for field position through the middle of the quarter, with two three-and-outs leading to a Packers possession starting at their own 13. It began well, with Rodgers finding Jordy Nelson for two pickups. Unfortunately, TE Jermichael Finley bobbled a pass sent his way into the air.

Rookie Niners safety Eric Reid picked the ball out of the air, and the Niners regained possession around midfield. They didn't make it very far, but they did manage to get into (what they thought) was field goal range, but backup kicker Phil Dawson sent the 48-yarder wide left.

On the ensuing possession, the Packers benefited from poor San Francisco tackling. Nnamdi Asomugha and Perrish Cox both helped the Packers extend plays into Niners territory. With 16 seconds remaining in the half, Rodgers found Jermichael Finley on an outside slant, and although Perrish Cox had the angle to make a play, he failed to wrap up and Finley barged into the end zone.

First half MVP: Aaron Rodgers. Despite continuous pressure, Rodgers has stayed strong in the pocket and made throws when it mattered most. Rodgers is 14-23 for 203 yards and two touchdowns so far, and was blameless on the interception.