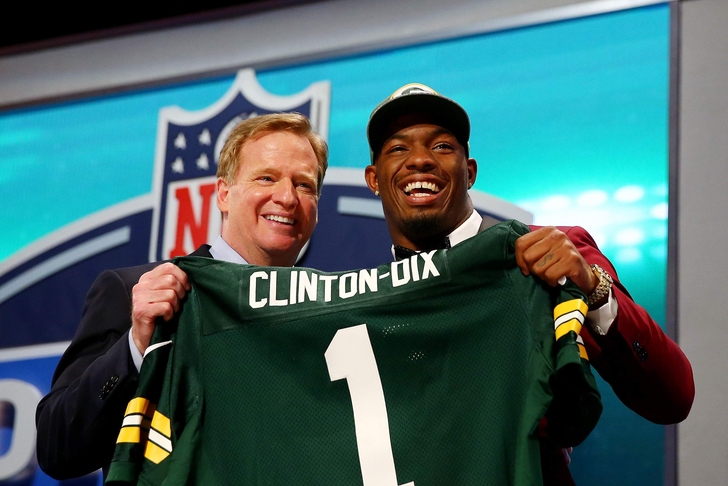 The Packers came into the 2014 NFL Draft with 32 players on their roster that had been drafted by Green Bay coming out of college. That is a credit to Packers GM and NFL Draft maestro Ted Thompson, whose drafts have formulated the core of an organization that's made the playoffs for five straight seasons.

What has made Thompson so successful has been his propensity to make the "best player available" pick, as opposed to reaching for a need-based pick. In 2014, the stars aligned for the Packers' war room, as players that fit team needs were sitting at the top of the board without Thompson having to shuffle his nine picks. Here's how I grade each pick:

Clinton-Dix has been a player that Packers fans had their eye on as soon as they opened draft guides and began looking at college talent in January. Safety was an obvious need for Green Bay, with the position generating zero interceptions and serving as a glowing weakness in a 24th-ranked defense in 2013. Clinton-Dix was being projected as high as the early teens, but fell during an early run on offensive players. The Packers got the last laugh, literally, by picking up a sideline to sideline defender who will instantly make the back end of their secondary better.

With Jordy Nelson, Randall Cobb and Jarrett Boykin all in the last year of their contracts, another of the Packers upcoming needs is wide receiver. According to SportingCharts.com, the Packers' receiving corps improved from 26th in dropped passes in 2012 (36) to sixth (18) in 2013. If there is anyone who would help contribute to that trend in 2014 and beyond, it's Adams, who caught 233 passes and 38 touchdowns in two seasons for Fresno State. The only knock on this pick was that players at more pressing needs were available, but making sure Aaron Rodgers has weapons to work with is still a high priority.

Considered a reach by some experts, Thornton fits the mold that the Packers said they were looking for in terms of versatile, high-motor athletes on the defensive line. Thornton projects as a five-technique in the Packers' 3-4 defense, but could very well see some playing time at the nose tackle in passing situations. The Southern Miss prospect recorded only 5.5 sacks in his college career, but figures to be used as an athletic run-stuffer in Dom Capers' 3-4 defense. His raw tackling ability will need refinement, but Thompson clearly saw something in Thornton that others didn't.

Another possible reach by Thompson was tight end Richard Rodgers, whose weight concerns and blocking ability were were among his potential drawbacks. Rodgers weighed as much as 275 pounds after a torn labrum and torn foot ligament caused him to fall out of shape as a sophomore. However, Rodgers lost 30 pounds in his junior year and showed reliability as a receiver at the tight end position, something the Packers could use with the departure of Jermichael Finley. Of the tight ends available, there were certainly those with fewer question marks, but the Packers have done alright with another guy by the name of Rodgers from Cal.

Bradford is a compact pass-rushing specialist who is projected to be an inside linebacker for Green Bay by experts like Mike Mayock of NFL Network. His versatility could have been the deciding factor in this pick, as the Packers sustained numerous injuries along their linebacking corps and could use a player who can play multiple positions. Bradford played the "Devil backer" position for the ASU Devils that was a combination hybrid rush/end/linebacker position. One thing that also jumped out in his tape was his ability to swat passes down at the line of scrimmage despite a much smaller frame.

Linsley has the kind of power the Packers have lacked at the center position in recent years. He posted 36 reps of 225 pounds at the NFL combine, which tied him for second among his position group. His weakness may be his quickness off the ball however, which may not have hurt him as much in the college game as it will in the pros. The pressure will not be on Linsley to start right away, but he will battle J.C. Tretter for a starting job in training camp.

For the first time since 2001, a Wisconsin Badger heard his name called as a Packers selection on draft day. It wasn't linebacker Chris Borland as many fans hoped, but Wisconsinites will nevertheless be pleased to see fan favorite Abbrederis getting a shot with Green Bay. Watching him in a couple Badger games over the years, he reminds me of Jordy Nelson with his hands and ability to make sideline catches. Abbrederis caught 78 passes for 1,081 yards and seven touchdowns in 2013, while showing return ability as well. Thompson could have very well drafted him as Nelson's replacement should the Kansas State product bolt for another team in free agency next year.

Of the Packers picks, I have to say this is the one I'm least excited about. Watching his tape, particularly against Texas Tech in 2013, he appeared to not use his hands well in the press. He also did not look good in jump ball situations, which is a bit confusing for a player with a basketball background. Durability has also been an issue, and he will turn 25 before the season starts, so he may not have as much time to refine his game. The Packers have some corners he could learn from, but Goodson's game may be beyond saving.

Standing at 6'3" and running a 4.30 forty-yard dash at the NFL Combine, Janis is a size-speed prospect if there ever was one. NFL.com had Janis as a 3rd or 4th round pick based on his measurables and production against lesser competition. If he doesn't make the team, he will likely be a practice squad addition that can learn from Nelson and Cobb and possibly make those players expendable instead of expensive re-signings after 2014. As far as 7th round picks go, teams try to find a player with raw talent that they can mold into a productive player. Janis has that potential.

Summary: The Packers addressed some of their biggest needs in this draft, but also managed to find some value later on. This was a draft that both Ted Thompson and the Packers fanbase can be happy with for now, but the real time to evaluate these picks won't come for another few years.