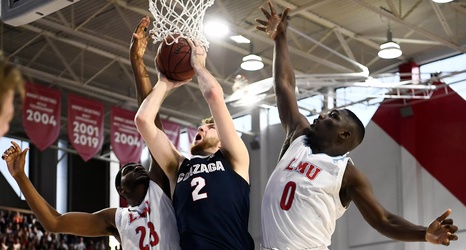 The Gonzaga Bulldogs extended their conference road winning streak to 35 games with an 87-62 victory in LA over the Loyola Marymount Lions.

Gonzaga had five players score in double figures. Filip Petrusev scored a team high 16 points and 7 rebounds, while Corey Kispert scored 11 of his 15 points in a strong second half. Ryan Woolridge put together another rock solid outing with 13 points, 6 rebounds, and 5 assists. Admon Gilder chipped in 12 points, while Drew Timme rounded it out with 10 points.