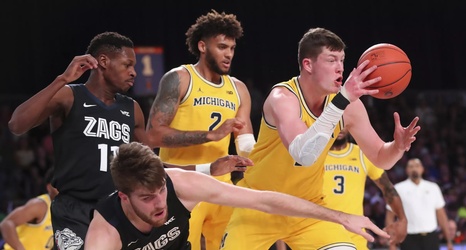 The legs of the Gonzaga Bulldogs finally gave out in a spectacular fashion in the Battle 4 Atlantis Championship game against the Michigan Wolverines. Michigan dictated the pace the entire stretch of the way, handing Gonzaga its first loss of the season, 82-64.

Things didn’t look great from the get-go, and Gonzaga went into the halftime trailing 36-25. The Gonzaga offense machine truly sputtered for the first time this season as the Michigan defense just denied the Zags every single shot. Gonzaga, which entered the game averaging 1.13 points per possession, scored 0.7 PPP in the first half, with four assists and eight turnovers.