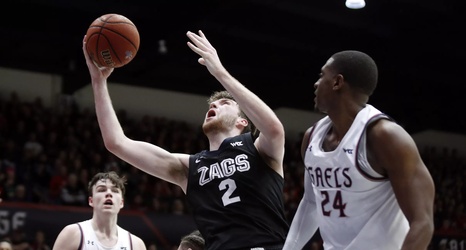 The Gonzaga Bulldogs did not require the wild come-from-behind finish that featured in the evening’s earlier rivalry matchup played on the opposite side of the country, as they led wire-to-wire in a dominant 90-60 victory over the Saint Mary’s Gaels.

Drew Timme impressed again with another standout performance as the freshman forward produced a career high 20 points (7-8 FG, 6-6 FT) to go along with 10 rebounds in the midst of a phenomenal stretch of basketball. Gonzaga’s frontcourt throttled an overmatched SMC defense, with Killian Tillie marking his return from an ankle sprain with 19 points and Filip Petrusev picking up a double-double of his own with 18 points and 11 rebounds.