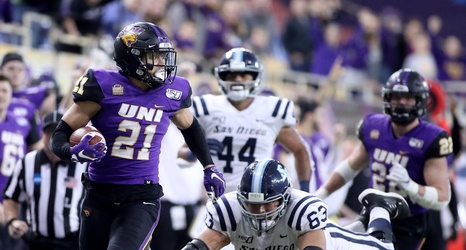 CEDAR FALLS — On a day its offense wasn’t at its best, the University of Northern Iowa defense more than picked up the slack.

Against a team that had scored 40 or more points in its last six games, the Panthers almost pitched a shutout in a 17-3 first-round FCS playoff win over San Diego at the UNI-Dome.

The Toreros were held nearly 300 yards below their season average of 498 yards per game, and the San Diego rush offense managed 26 yards on 28 carries.

“Playing against a team like that, that has a great offense, I was proud of the way our defense was able to play Panther defense,” said defensive end Brawntae Wells, who accounted for six of UNI’s points with a 34-yard interception return for a touchdown in the first quarter.