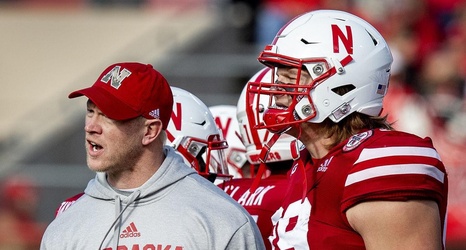 Playing in his first game as a true freshman, Nebraska defensive lineman Ty Robinson (right) looks on as Husker coach Scott Frost has a word with the players during a timeout in the closing moments against Wisconsin on Nov. 19.

National Signing Day has come and gone, and Nebraska finds itself right where it finished December.

That’s not a bad thing by any stretch, given the Huskers have just two remaining scholarships to use for the 2020 cycle. Head coach Scott Frost and company targeted only a couple of players in January, and when they went elsewhere, NU decided to pocket its two remaining spots.