(1) Gonzaga Holds On For 77-73 Win Over (7) South Carolina, Advances To National Championship Game 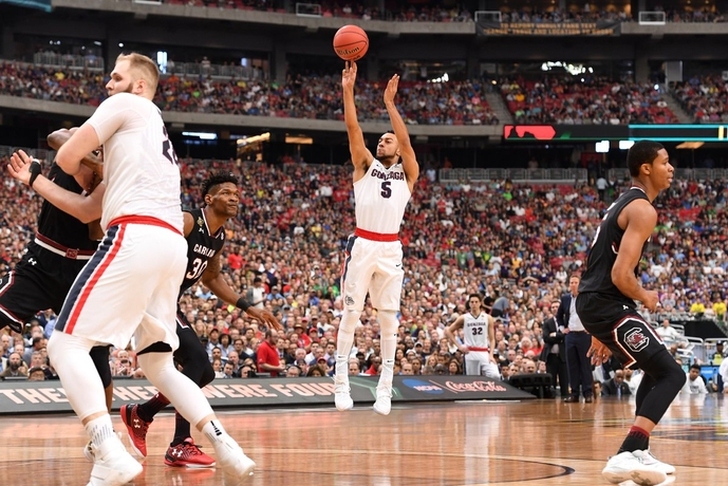 The Gonzaga Bulldogs led the South Carolina Gamecocks 65-51 with just under 11 minutes to play and it looked like the Zags might run away with a Final Four victory. But, the Gamecocks didn't roll over and managed to take a 67-65 lead with just over seven minutes to go. That led to a thrilling finish in the first Final Four game Saturday, with the Zags taking a lead and holding it for the final six minutes in a 77-73 win.

The Gamecocks had a chance to tie the game, but the intentionally missed free throw with three seconds left by South Carolina was rebounded by Killian Tillie of Gonzaga. He then hit both free throws to ice the game.

With the loss, the No. 7 seed Gamecocks Cinderella story ends. No. 1 seeded Gonzaga is now just one game away from its first ever National Title. Even with 12 turnovers (to South Carolina's 5), the Zags' spectacular shooting was enough to deliver the win. The Zags shot 48.3 percent from the field and 47.4 percent from 3-point range.

Leading the way for the Bulldogs was Nigel Williams-Goss. He racked up 23 points (on 9 of 15 shooting), six assists and five rebounds. Jordan Matthews was hot from 3-point range, hitting four 3s en route to 12 points. The two star bigs for Gonzaga, Zach Collins and Przemek Karnowski, played great. Despite leaving in the first half after being hit in the eye, Karnowski put up 13 points and five broads. Collins was even better, with 14 points, 13 rebounds and six blocks. The rebounds and blocks were career highs.

After battling the flu earlier this week, Sindarius Thornwell didn't look himself. He had 15 points and five rebounds, but was just 4 of 11 from the field. Four Gamecocks reached double-figures, led by P.J. Dozier with 17. Chris Silva had 13 points and 13 boards, while Duane Notice had 10 points.

Gonzaga will play the winner of North Carolina and Oregon for the National Championship on Monday.