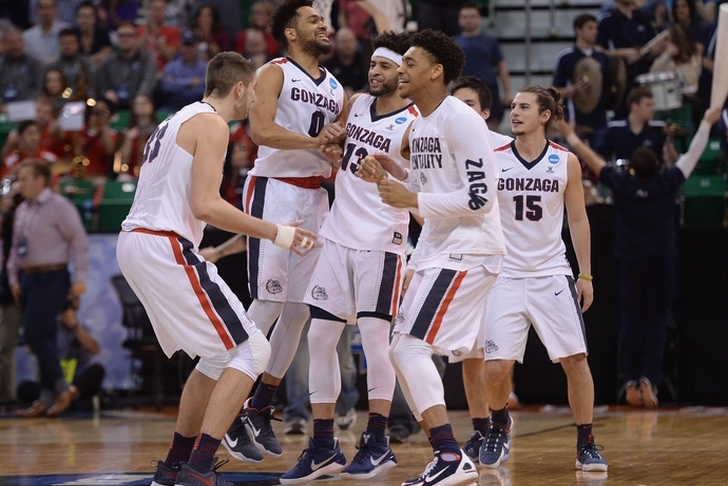 The giant monkey is now off of Mark Few's back. With a 83-59 win over the Xavier Musketeers, the Gonzaga Bulldogs are going to the Final Four for the first time in school history.

Gonzaga caught fire from three-point range, going 12/24 from behind the arc led by WCC Player of the Year Nigel Williams-Goss (23 points, eight rebounds, four assists). On the flip side, the Zags held Xavier to just 35.5 percent shooting from the floor, including an awful 12.5 percent from distance.

The Zags controlled this game from start to finish and had the lead for the final 38 minutes of the game. Xavier was able to keep it close for most of the first half, but a 14-5 run from the Bulldogs gave them a double-digit lead they held for the rest of the game.

The Musketeers did manage to cut the deficit to 10 at the start of the second half, yet that was as close as they would get. Gonzaga responded with a 18-8 run to build a 69-49 lead, essentially putting the game away.

Xavier star Trevon Bluiett had carried the team through the first three rounds of the tournament, but he struggled in this one, finishing with just 10 points on just 3/14 shooting. J.P. Macura led the Musketeers with 18 points.

Forward Johnathan Williams was the best player on the court at times in this game for Gonzaga, and he finished with 19 points and nine rebounds.

The Zags will face the winner of the East Region (Florida vs. South Carolina) in the Final Four next Saturday in Glendale, Arizona. Gonzga beat Florida, 77-72, in the AdvoCare Invitational in November.

Follow our Gonzaga Bulldogs news page for all the latest Gonzaga basketball news!