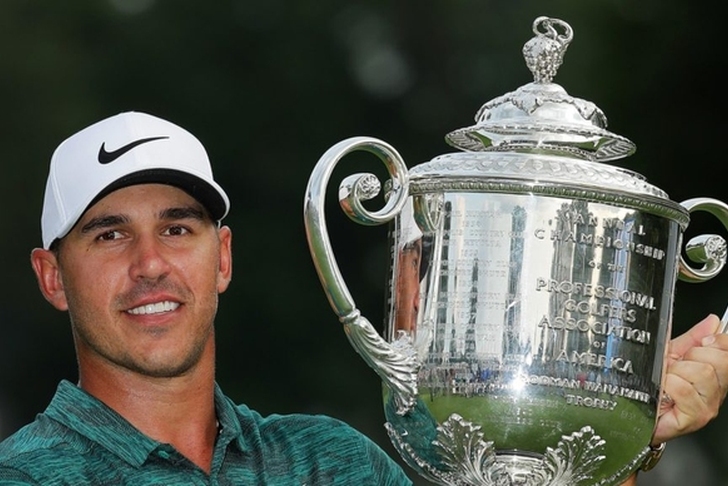 Rory, the favorite for most, and the man from Northern Ireland who many believe should have been stealing the headlines as a major-winning machine in recent years, particularly as he has described himself in a ‘peaceful place’ and has had a very good time on and off the course ever since marrying and ‘settling down’.

However, there’s been a few rather big trophies and green blazers that have alluded the Brit since his last major triumph. Despite some European bragging, especially after the Phoenix and Ryder Cup wins, Rory’s failure to grasp his opportunity has opened the door for the likes of Jordan Spieth, Dustin Johnson, Jason Day or even Justin Rose; all of whom are striving to pick up the mantle as consistent major winner and true world number one.

Brooks Koepka’s latest win has inflicted a large blow on many of his rivals. Talk about Koepka dominating recent majors has been mooted by some but the press has been quick to pick up on this story, creating enough headlines and stories about Brooks to even encourage Fleetwood to snap: “It’s not over yet.”

A few shanks, a few missed putts, and a few erroneous drives, but all-in-all Koepka, who came into the final day with a seven-shot lead, had the capital in the bank to make those mistakes having built a 7-shot lead going into round 4 of the PGA championship at the daunting Bethpage Black.

Of course Koepka knows this course like the back of his hand, and if you were a betting man and decided to dig out your android betting app or apple betting app over the weekend you’d be forgiven for throwing a little bit behind the defending PGA champion.

Aside from this impressive title defense, Koepka has actually won four of the last eight major championships he has competed in; with that beautiful swing and magical putter helping him to victory at the U.S. Open in 2017 and 2018.

If you’re a golfing history buff, you’ll also note that he is the first golfer concurrently holding back-to-back titles in two majors. The top spot in the world golf rankings is soon likely to follow.

But ‘the prominent challengers’, though politely impressed with Koepka’s performance, were not bowing down completely and a few contenders had a few messages for the unassuming Koepka.

Rose, who took to the last major ranked second, jibed that he looks forward to playing Koepka anywhere but the Black Course.

“This golf course was in his wheelhouse; it fit his skill set, and he’s obviously at the top of his game,” Rose said outside the scoring area Sunday afternoon after he finished tied for 29th. “If we had to play this golf course every tournament for the rest of time, I’d be concerned. But we don’t.”

Day who won the PGA in 2015 admitted that Koepka had dominated the majors over recent years but denied that that the rest of the field would be in any way intimidated by his string of victories.

“Unless it was Tiger churning out major after major, the message from Day and his fellow clubhouse challengers is that the game is on.