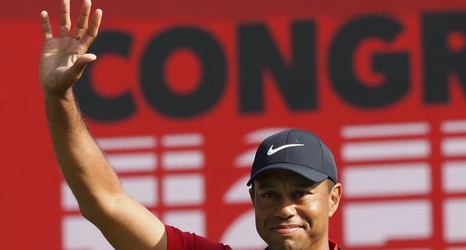 Tiger Woods may value his Masters title and record-tying 82nd career tournament victory just a little bit more, but he has another accomplishment to add to his 2019 resume.

Woods won Monday's six-man exhibition at the Baha Mar hotel in the Bahamas, beating out the likes of Jordan Spieth, Henrik Stenson, Bryson DeChambeau, Gary Woodland and Jon Rahm. The players had to hit a wedge shot at a moving target in the hotel's pool as a way of kicking off the Hero World Challenge tournament.

The 15-time major champion defeated Spieth in dramatic walk-off fashion at the end, hitting the bullseye and earning 500 points to make up the 100-point deficit he was facing.