U.S. pods based largely on personality - and 'fun' - at Solheim Cup 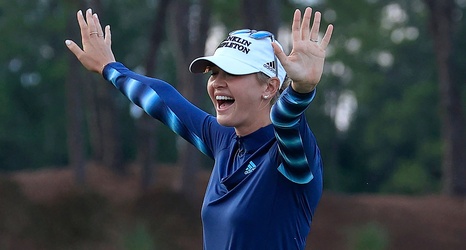 TOLEDO, Ohio – With a smirk, Pat Hurst admitted the obvious: “Yeah, of course you can tell if they’re coming in fours, what the pods will be.”

The U.S. Solheim captain didn’t want to reveal too much on Wednesday at Inverness Club, but the interview sheet was pretty clear: three groups with four Americans each, meeting the media in the three days leading up to the start of the competition.

Up first was the foursome of Jessica Korda, Nelly Korda, Megan Khang and Ally Ewing. Assistant captain Stacy Lewis is overseeing that squad, known as “Chesnee’s girls,” according to Jessica Korda – a reference to Lewis’ daughter’s name.