Tiger Woods's Memoir Titled 'BACK' Is Eerily Familiar to This Blogger 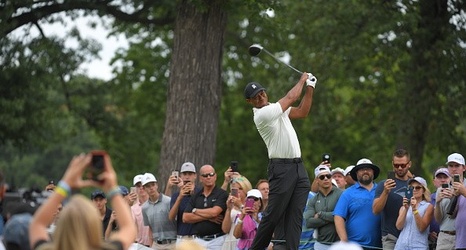 MEDINAH, IL - AUGUST 16 : Tiger Woods plays a shot on the sixth hole during the second round of the BMW Championship at Medinah Country Club (No. 3) on August 16, 2019 in Medinah, IL. (Photo by Stan Badz/PGA TOUR via Getty Images)

Did I predict the title of Tiger's forthcoming memoir seven years ago?You be the judge. The following is my spoof from the March 2012 archives.
MERRIAM-WEBSTER, AN ENCYCLOPEDIA Britannica Company, today announced that Tiger Woods, the former No. 1 golfer in the world, has been officially added as the fourth entry in the definition of the word "back.