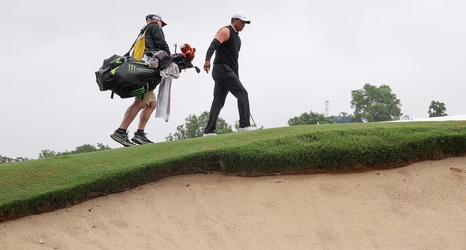 TULSA, Okla. – Following his worst round ever at the PGA Championship, the toll of 18 chilling holes was evident when Tiger Woods was asked his thoughts on playing Sunday’s final round.

“Well, I'm sore. I know that is a fact. We'll do some work and see how it goes,” said Woods, who carded a 9-over 79 that included a 5-footer for par at the last hole to narrowly salvage a round in the 70s.

Woods struggled from the start of Round 3 with a tee shot that found a water hazard on the second hole, leading to the first of seven bogeys, but it was a triple bogey at the par-3 sixth hole that began his unraveling.