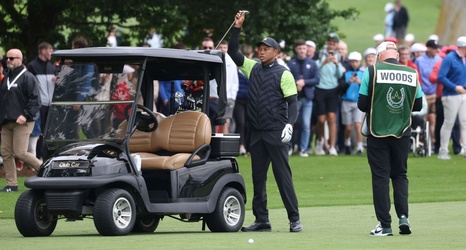 Tiger Woods was back playing competitive golf Monday, shooting a 5-over 77 at the star-studded JP McManus Pro-Am at Adare Manor in Limerick, Ireland.

Woods sits in a tie for 43rd in the 50-player field. Xander Schauffele, coming off a win at the Travelers a week ago, sits in first after an opening, bogey-free 64.

For Woods, the event is a tuneup to next week's Open Championship at famed St. Andrews in Scotland. Woods hasn't played since withdrawing following the third round of the PGA Championship, where he struggled in cooler temperatures while shooting a 79, then pulled out hours later.