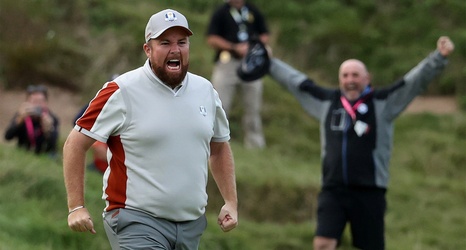 Shane Lowry was the animated spirit of a lackluster performance by Team Europe, which suffered a 19-9 loss at the 43rd Ryder Cup.

One of the few bright moments for Europe was when Lowry holed an 11-footer on the final hole of his Saturday fourballs match to beat Tony Finau and Harris English. The Irishman pumped his fist in the air and dropped his putter while yelling in celebration.

But the while the 2019 Open champion showcased the thrill of victory, he also endured the agony of defeat. Golfwrx reported that Lowry, while speaking on Instagram Live to PaddyPower, a restricted profile in the U.