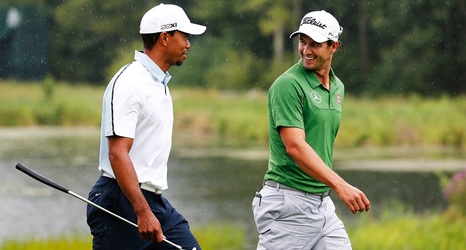 As Adam Scott prepares for another shot at the Presidents Cup in front of partisan crowds, he has a word of advice for the throngs of Australian golf fans that will line the fairways and greens this month at Royal Melbourne: don't cheer for Tiger Woods.

Woods will be making a rare appearance in Australia, his first since the 2011 matches at Royal Melbourne, as he becomes the first playing captain in the biennial affair since Hale Irwin in 1994. While Scott concedes that Woods will be a big draw along the Sand Belt, whether he's playing a match or simply driving a cart, he told the Herald Sun in Melbourne that he hopes fans in attendance help to maximize the home team's edge.