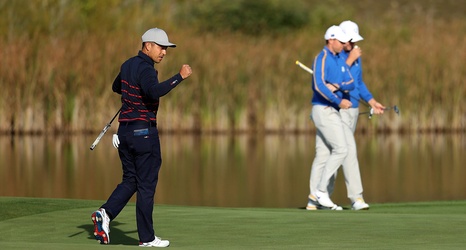 The 43rd Ryder Cup is officially underway, and the Americans have drawn first blood.

Despite the American duo of Jordan Spieth and Justin Thomas dropping the opening foursomes match against Jon Rahm and Sergio Garcia, the home team took each of the other three matches to open up a 3-1 lead on Friday morning at Whistling Straits.

Here's how it all unfolded, match by match:

The first point of this Ryder Cup went to the Spaniards, and they did it against a pair that went 3-1 three years ago in Paris.