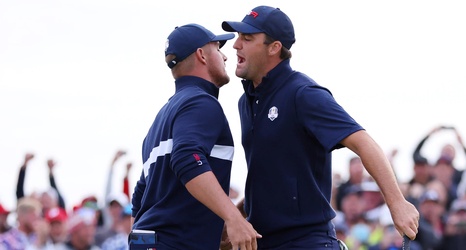 It quickly appeared that maybe that kind of celebration was premature, as Europe led three matches quickly, but the Americans held off an afternoon charge by the Europeans to split the fourth and final team-play session, 2-2. The U.S. will now enter Sunday's 12-match singles session with an 11-5 lead and will need just three-and-a-half points to win back the cup.

World No. 1 Jon Rahm was his usual dominant self, again teaming with Sergio Garcia to beat Jordan Spieth and Brooks Koepka.