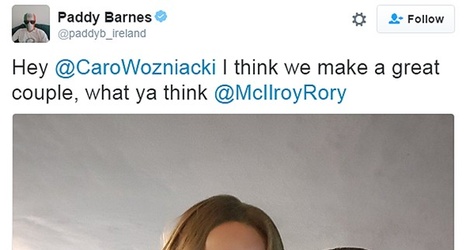 Rory McIlroy has moved on with his life since his 2014 breakup with Caroline Wozniacki. Others have not.

While in Brazil for the Olympics, Irish boxer Paddy Barnes pulled an absolute savage move, tweeting a photo with the Danish tennis pro and tagging McIlroy in the caption, "I think we make a great couple, what ya think @McIlroyRory."

Instead of just ignoring the incident, the No. 4 golfer in the world handled the tweet with the same class and humor he's shown throughout his career, responding with a tweet for both Olympic Irish boxers, "good luck lads!