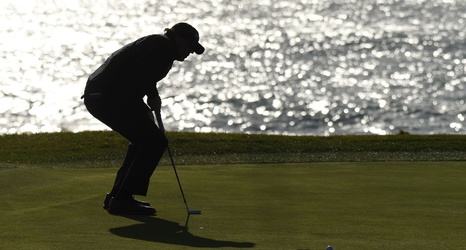 PEBBLE BEACH, Calif. -- Phil Mickelson put himself on the brink of a fifth victory in the AT&T Pebble Beach pro-am by turning a three-shot deficit into a three-shot lead when a wild day of weather kept him from finishing Sunday.

Mickelson will have to return at 8 a.m. Monday to play the last two holes.

About the only thing that didn't go Mickelson's way was the timing. The final round started an hour late because of rain, and then was delayed two more hours when sunshine gave way to a hail storm that covered greens in white.