New caddie, opening 65 at The Open for ... Brian Harman, not Bryson 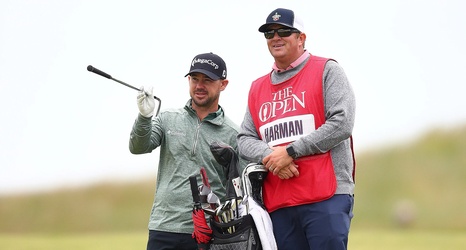 SANDWICH, England – Much was made of Bryson DeChambeau’s move to a new caddie at this week’s Open Championship, but DeChambeau is not the only player with a fresh face on the bag.

Brian Harman, who charged out to an early lead with four birdies through his first five holes, also went with a new caddie at Royal St. George’s, his longtime manager Jeremy Elliott.

Elliott had to step in for Harman’s regular caddie, Scott Tway, because of passport issues.

“COVID has been tough,” said Harman, who was tied for second after a first-round 65. “[Tway] was trying to get his passport renewed in time and he just couldn’t get it done.