Mickelson leads by 3 as Pebble heads for Monday finish 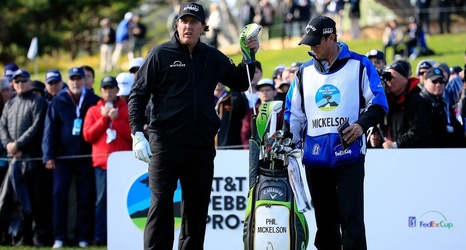 After the final round of the AT&T Pebble Beach Pro-Am was delayed by a hail storm, only darkness could keep Phil Mickelson from adding another chapter to the tournament record books.

Mickelson started the final round three shots behind Paul Casey, but he used a run of back-nine birdies to overtake the Englishman and build a three-shot lead. When darkness fell, Mickelson and Casey had just two holes left to play (Casey still faces a 3-footer for par on 16) and will return to the course at 11 a.m. ET to complete the final round.

Mickelson has won this event four times before, most recently in 2012, and a victory would tie him with Mark O'Meara for the most in tournament history.