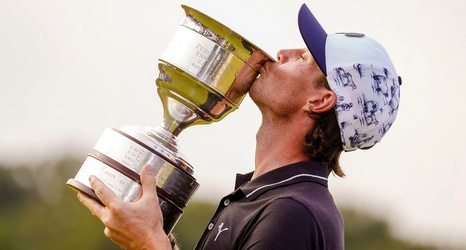 CROMVOIRT, Netherlands — Kristoffer Broberg of Sweden shot a tense level-par 72 Sunday to finish at 23 under and win the Dutch Open for his second European Tour victory and first since beating Patrick Reed in a playoff to clinch the 2015 BMW Masters.

The 35-year-old set course records at the Bernardus club in Cromvoirt in the second and third rounds, shooting a 64 on Friday and an 11-under 61 on Saturday.

But the 772nd-ranked Swede struggled Sunday, despite starting the day with an eight-shot lead, as Alejandro Canizares and Marcus Schmid both piled on the pressure with 5-under 31s on the front nine.