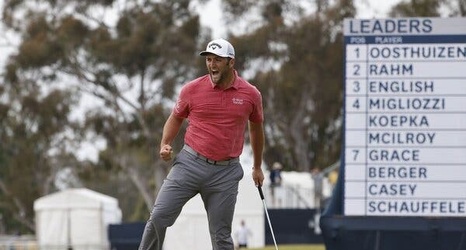 SAN DIEGO — Jon Rahm on Sunday won the 121st U.S. Open, America’s national golf championship. The victory is Rahm’s first in a major championship and makes him the first Spaniard to win the event. It also ends a six-year streak of American winners in the event. Rahm started the final round at Torrey Pines Golf Course three strokes off the lead held by Louis Oosthuizen of South Africa, Russell Henley of the United States and Mackenzie Hughes of Canada.

For Rahm, 26, it was his sixth career victory in a PGA Tour-sanctioned event. Last month, he was leading the Memorial Tournament in Ohio by a commanding six strokes with one round remaining but was forced to withdraw when he tested positive for the coronavirus.