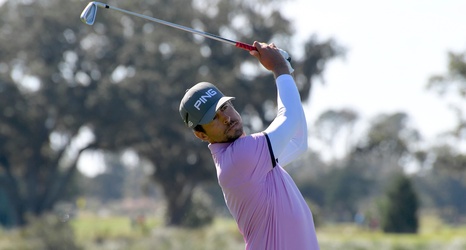 ST. SIMONS ISLAND, Ga. – When Scott Harrington found himself in contention earlier this fall at the Houston Open, he considered having his wife, Jennifer, fly from the couple’s home in Scottsdale, Ariz., to be with him during the weekend.

The couple ultimately decided to not make the trip and the 39-year-old PGA Tour rookie finished runner-up. After an opening 65 on the Seaside course, however, Harrington might need to consider some last-minute travel arrangements for his wife.

“Maybe, it would just kind of depend where I'm at heading into Sunday or maybe even heading into this weekend,” said Harrington, who was tied for fifth place after Round 1.