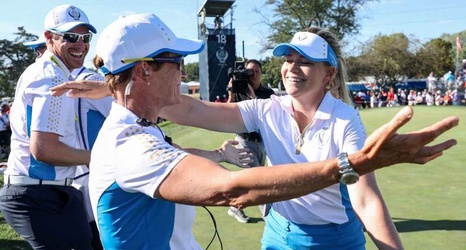 TOLEDO, Ohio -- Europe retained the Solheim Cup on Monday, clinching just its second victory on U.S. soil when Matilda Castren closed out Lizette Salas 1 up to give the visitors the decisive point in a 15-13 victory.

Castren calmly curled in a 10-foot par putt on the 18th to edge Salas and give Europe back-to-back Cup victories for just the second time in the 31-year history of the biennial showdown between the two rivals.

"It's just crazy, crazy," said the 26-year-old who became eligible to make the team only after winning an event in her native Finland in July.