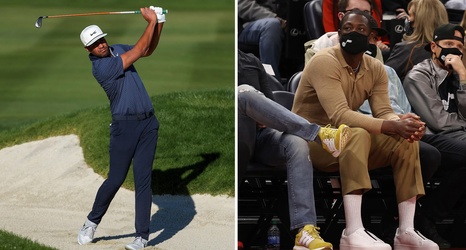 While sitting courtside at the Utah Jazz's season opener Wednesday night, future NBA hall of famer Dwyane Wade got some pointers on his golf game from Tony Finau.

During the game, the camera caught the two talking and it appears Finau was giving Wade advice on his grip and follow-through technique.

Finau, a Utah, native, also quoted the video on Twitter, saying, "Pleasure spending time with the legend @DwyaneWade, what a gem of a guy."

Wade, now a part-owner of the Jazz, retired in 2018 after a 16-year career that included three championship wins with the Miami Heat.