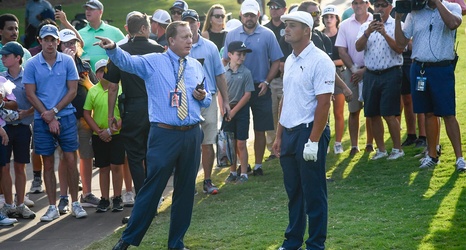 ATLANTA – Bryson DeChambeau isn’t afraid to take an aggressive line off a tee if he thinks it will give him an advantage, but it almost cost him a shot Saturday at the Tour Championship.

DeChambeau launched his drive at the par-5 18th hole well left of the fairway and toward the adjacent 10th hole. His shot ended up on the far side of the 10th fairway and next to the 11th tee box, at least that’s what he was told.

After more than three minutes of searching, which is the limit under the Rules of Golf, he couldn’t find his golf ball until a PGA Tour official reviewed the footage from a nearby ShotLink camera and discovered a fan had picked up DeChambeau’s golf ball and walked away.