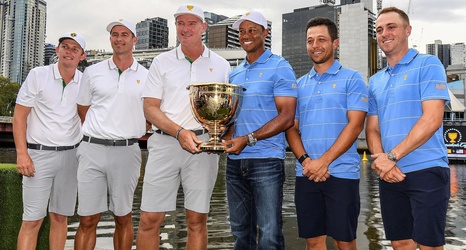 MELBOURNE, Australia – The U.S. Presidents Cup team arrived in Australia for this week’s matches a little later than originally planned.

The team’s charter flight from the Bahamas, where most of the team was playing last week’s Hero World Challenge including playing-captain Tiger Woods, was delayed and didn’t arrive in Melbourne until 12:30 p.m. (local time).

“Justin [Thomas] is still half-asleep,” Woods joked at Monday’s opening event. “Do I look that bad?” Thomas asked with a smile.

All total it was a 26-hour trip for the team and Woods said they spent much of the flight sleeping and getting treatment to prepare for this week.