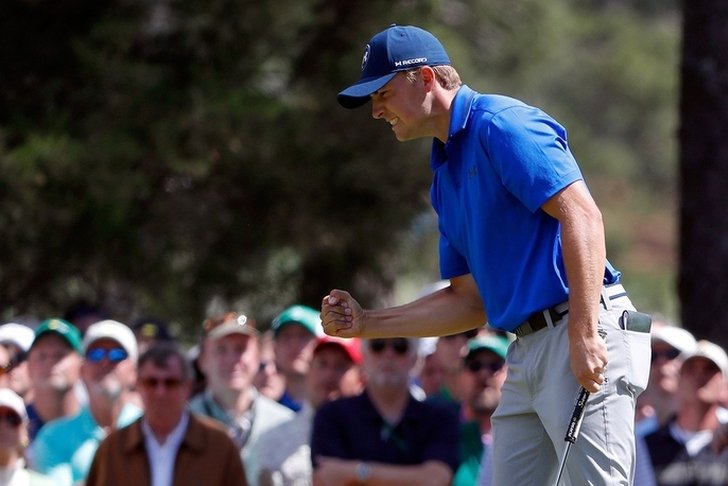 Jordan Spieth continued to be the story at the 2016 Masters Tournament on Moving Day, as he maintained his lead through seven-straight rounds after Day 3 -- the longest streak in the history of Augusta National. It wasn't all a walk in the park for the 22-year-old phenom, however, as he finished his third round with a bogey and double-bogey for a 1-over 73.

Strong winds again wreaked havoc on the course, limiting scoring on the day. Only tournament newcomer Smylie Kaufman managed a score in the 60s. Check out the leaderboard, risers/fallers, highlights and more from Day 3 of the 2016 Masters Tournament below.

Spieth breaking Arnold Palmer's record for the most consecutive rounds on top was almost spoiled by a pair of wild tee shots and wedges, but he remains one stroke ahead of Kaufman, who paced the field with a 69. Bernhard Langer, 58, continues to defy the odds and hang around the leaderboard, while Rory McIlroy took a tumble and now finds himself tied for 11th.

Risers/Fallers
The most notable fall was McIlroy losing ground after finishing Day 2 in second. Danny Lee and Scott Piercey, who were tied for third at minus-2, now find themselves outside of the top 20. Langer putting in three-straight birdies on the back nine to finish with a 70 was easily the most impressive jump of the day.

Watch Bernhard Langer chip in from more than 40 feet on No. 14 to move into a tie for third. #themasters https://t.co/BToNJmAwDu

He's one of only 5 players under par today. https://t.co/bM3BMn3ZOC

Better weather conditions are expected tomorrow, so it should be a shootout all the way until the end. Jordan Spieth will look to build on his seven-round lead that dates back to last year's wire-to-wire win, with several contenders nipping at his heels.