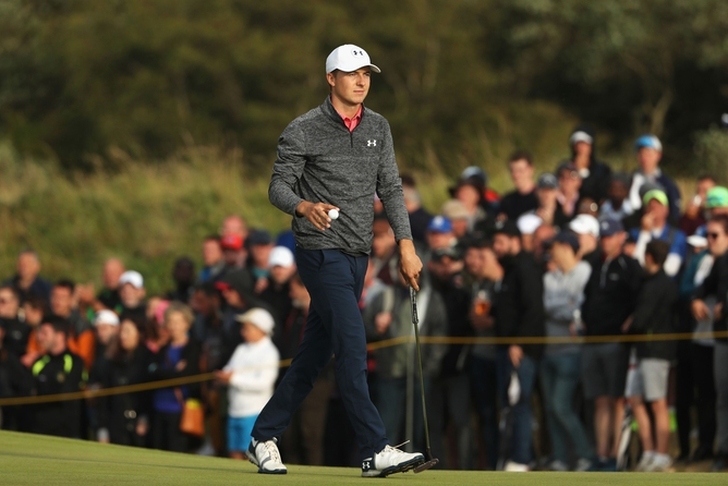 Jordan Spieth ended his two-year drought without a major victory, holding off Matt Kuchar on the back nine to win The 2017 Open Championship.

Spieth now becomes the youngest American ever to win The Open Championship, and it's the first time in his career he has won the tournament. He had never finished higher than fourth.

Speith, who entered the day with a three-shot lead over Kuchar, struggled through the first 13 holes on Sunday. He bogeyed four holes on the front nine (he had bogeyed four holes in the first three rounds combined) and hit his drive so poorly on the 13th hole that he had to take a drop from the practice area.

Spieth escapes with a bogey, but now trails Matt Kuchar by one at #TheOpen. pic.twitter.com/SP5C2P7dni

However, he escaped that hole with just a bogey, and though it caused him to lose the lead for the first time all weekend, it sparked some phenomenal play down the stretch.

Spieth birdied the next hole to re-gain a share of the lead, then drained a tough eagle on 15 to take back sole possession of the lead. He never tailed again.

That didn't take long.@JordanSpieth regains a share of #TheOpen lead after making birdie on No. 14. pic.twitter.com/dzT0k6UGuW

A look at @JordanSpieth's birdie on No. 16 that gave him a two-shot advantage.pic.twitter.com/mSBB9n8608

For a while, it looked like Haotong Li - who shot a final round 63 to finish at 6-under on the tournament - may be in position for a playoff. Spieth and Kuchar were both a 8-under through 12 and trending downward before Spieth caught fire over the last five holes.

Here's how the final leaderboard looked: